The first GAMEHIGHED’s big milestone reached: we have completed four reciprocal study visits, closing the initial stage of the project. We hosted the last visit at UKW in Bydgoszcz from the 11th to 13th of December, followed immediately by the kick-off “transnational project meeting” (as they are called in Erasmus+) on Saturday the 14th.

On Day 1 we talked about the game studies & design programmes run at UKW. Michał Mochocki opened the day with a somewhat-historical overview of the past Gamedec.UKW programmes and collaboration with the industry. Marta Tymińska shared her experience as a newcomer to the Gamedec teaching staff and her thoughts on teaching game studies. Piotr Milewski spoke about various forms of internships and commercialisation of student’s projects on the examples of Sirius Game Studio, New Entertainment and Concept Games. He also ran a card game fast prototyping workshop. Next, we took our guests to a big hall in the university library for a presentation of student-created game prototypes, followed by Krzysztof Chmielewski’s talk about the newest iteration of Gamedec.UKW curriculum, reformatted as it was into a dual work-study degree.

Just a few hours later we all met at the gamer’s pub Cybermachina to meet local game professionals, who gathered on this very evening for a monthly gamer/gamedev meet-up called Pog(R)adajmy. If it sounds like a busy day, it’s because it was.

On Day 2 we brought industry professionals to speak with us at UKW. After Aleksandra Mochocka’s overview of game studies courses from Gamedec.UKW, we opened the floor to representatives of Concept Games, RemiVision and Ulric Games. Moreover, in the afternoon we were visited by Patryk Batko from Vivid Games and Filip Kucharski from Divine Blacksmiths, both sharing their experiences as gamedev professionals hired by UKW to teach video game development to gamedecs. (Plus, both had been our students.) Adding to this an hour of speed dating between our guests and gamedec students, meetings with Vice-Rector Prof. Marek Macko and with International Relations Office staff, and a talk by Rafał Klein from our partner secondary school, it was another well-spent day. (This I conclude based on the words of the honourable guests; it’s not for the host to judge.) 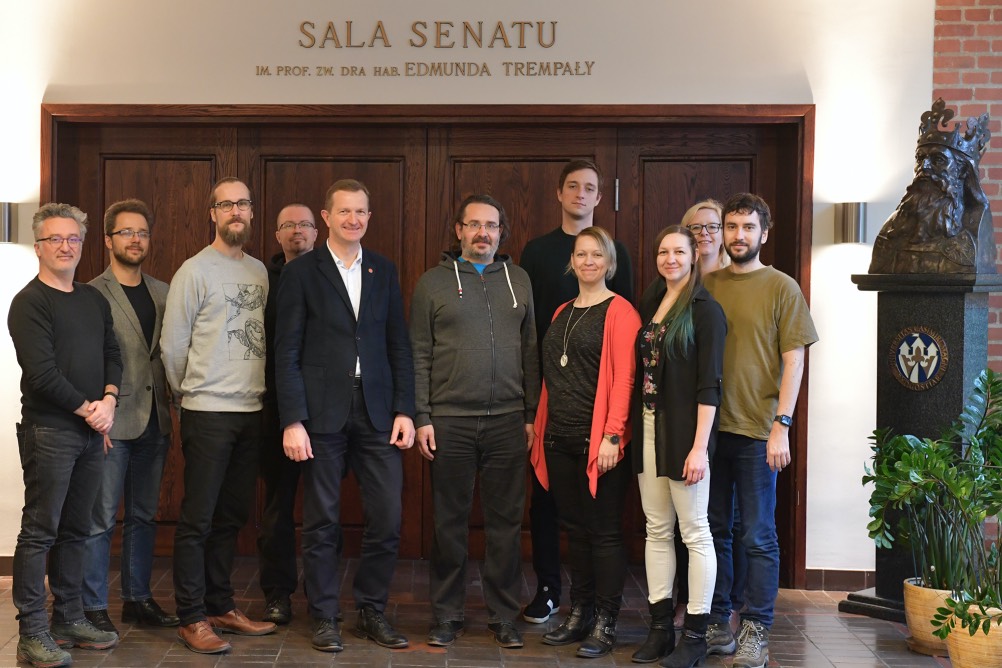 And yet again, the day was far from over with the last scheduled talk. In the evening we met at Kraftodajnia to play Pubcrime: a game designed jointly by our staff and student trainees, now successfully run by Concept Games in pubs all across Poland.

Day 3, the ominous Friday the 13th, had only three items on the agenda - all of them special. We started the day with breakfast at Vivid Games, a Bydgoszcz-based developer of high-quality mobile games. We have a long history of collaboration with them, including game jams, internships & traineeships, curriculum consultation, and teaching. As you could guess, they also hire our students. The next stop was Exploseum: formerly a gigantic Nazi industrial compound producing munitions, dynamite and chemical weapons, now a few of its 1500+ buildings turned into a museum. Two game prototypes for Exploseum have been recently developed by gamedecs, as I heard. Finally, we met with Maciej Miąsik, who drove to us all the way from Warsaw. He was a phenomenal guest, having no less than five areas of relevant experience: a dinosaur-level game dev veteran; creator of game curricula for Warsaw Film School and Polish-Japanese Academy of Computer Technology; game dev teacher there; curriculum designer and teacher at private industry-driven Game Dev School; and active contributor to Indie Games Poland foundation in its many activities supporting young game studios. Very good speaker, on top of that. Quite a character!

What about the late-night programme? Yes, we did it again: another gamer-friendly pub (Prolog9) with awesome craft beer - and another informal-yet-fruitful meeting with Bydgoszcz game dev. Third evening in a row. If it sounds like sliding into a boring routine… it was far from it.

Saturday the 14th finally offered some quiet time: no outsiders, no students, just an internal meeting of the project personnel to plan work for the upcoming months. Study visits being over, we are now entering a hyperproductive stage. Gears have shifted to the creation of intellectual outputs. The first materials will be released in February 2020. Stay tuned: it’s coming soon.